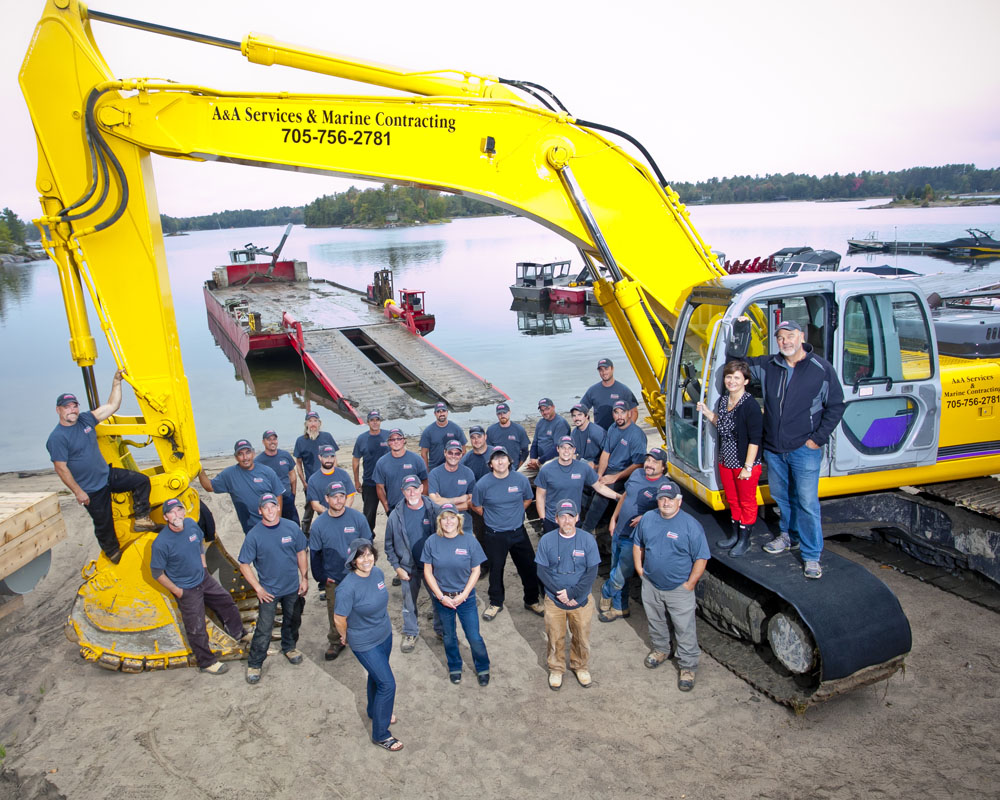 A&A Services and Marine Contracting Ltd. is your complete design and build contracting solution for Muskoka and South East Georgian Bay. We specialize in 4-season waterfront and island cottages, shoreline dock and boathouse projects, construction and landscaping design, including complete permit application services. With over 40 years experience serving the area, we can help you realize your cottaging dreams!

Initial sketches to final construction, we'll see your dream through to the final touches.

From vision to oasis, our team is equipped to see you through. Dredging, septic, grading, excavation and road building.

So you’ve decided to build, but where do you start? There are so many things to consider before starting your build that it can become very overwhelming. We’ve put together this home builders guide and checklist to help you get organized and start preparing to make your dream a reality. Click the book above view the guide and get planning!

WHAT OUR CLIENTS ARE SAYING

"Hi Armin,
I just want to say thank you for the opportunity that you've provided me. It's a pleasure to work with everyone at A&A Contracting. The office staff and the skilled tradesmen are not only the best at what they do but they are also some of the best people I've ever worked with. That starts at the top! Thanks Again!"

"My wife and I had a dream, to build an unusual cottage on an island in one the world’s most inhospitable landscapes…Georgian Bay! We found the right property (thanks Armin!) and set about making plans. That was the easy part…now we had to build it from the ground up.
From the permit stage to the final toast on the dock…we felt like we were working together to create something that would last for generations. The A&A crew offered us sound advice at every turn, advice that came from years of building experience and most importantly, family experience. They were not just concerned about the structure, they were concerned about what it would feel like to actually live in the building. This attention to detail became the hallmark of our experience with Armin and Anne Marie.
If you are considering a build or a renovation and looking for the best…you need not look any further!
Building a dream in Georgian Bay? Go with A&A and like us, you’ll end up glad you did!"

"Kevin and I are always pleased to have the opportunity to recommend A&A. The fact that we had A&A build our first cottage, then totally renovate it again 15 years later says it all.

We had never been involved in a construction project when we decided to build our first cottage in 1996. We were very green, so we needed a builder who could instill confidence in us that they could handle the job. The cottage was to be built on an island an most of the construction was going to be done over the winter. Armin and Glen gave us the feeling of confidence that we were looking for.

We had our cottage design, but we didn't know exactly where on the property it should go. We knew the perfect spot was exactly where a massive boulder sat. That boulder was probably the size of half of the cottage. It never occurred to us that the boulder could be blasted. Armin and crew blasted the boulder and the construction in February, and I saw it for the first time in May of that year. Email was just becoming popular and cell phones didn't have the ability to send photos or emails at that time. We relied on phone calls and faxes. Even without being able to communicate the way we do today, we would say that the experience was painless. We trusted Armin and Glen to build us our cottage, and the did exactly that.

Fifteen years later, our needs had changed and it was time to enlarge and reconfigure the cottage. The renovation was very complex so there really was no question in our minds who we were going to use to do this work. The renovation is now complete and we are once again thrilled with the finished cottage. We have always been so impressed by the quality of the people that Armin hires. From foreman Jeff and his crew, to the sub trades, they all have an incredible work ethic and it shows up in the level of detail and quality of their work

If we were to do it again, (which we won't be doing), we wouldn't hesitate to hire A&A Services again."

Our experience working with Armin and Annemarie and all the staff at A&A Services and Marine Contracting has been very positive. The process of procuring a lot in Cognashene, building a bunkie and a cottage has taken place over the last 6 years, which was the time frame that we had requested. A&A was very helpful with liaising with the municipality and securing permits for installation of the septic system and building construction. As the projects proceeded communication was good in order to keep us informed of progress. Any issues that arose were promptly dealt with to our complete satisfaction. Now that we’re done we are very pleased with the level of quality in the construction and finishing of both buildings as well as the landscaping. A&A brings a level of knowledge and expertise that can only come from having successfully completed many custom, high end building projects in a pristine area that presents numerous construction challenges. This experience enables them to advise on design, materials and techniques for all facets of the project. Most importantly all A&A staff were professional, responsive and enjoyable to work with. We look forward to many years of enjoyment of our property in this special part of the world and happily provide this testimonial to A&A’s service.

"To whom it may concern:
This letter reflects our highest praises for Armin Grigaitis, Glen Heintzman, and their entire A&A organization. We have worked with Armin and Glen for over 13 years and they have consistently delivered nothing but the most superb products & services. They have always demonstrated talent, honesty, integrity, and responsibility and are a pleasure to work with. The beautiful cottage they constructed for us with loving care and a real “can-do attitude” is no less than a comfortably livable work of art. If you are searching for the best, look no further."